Noricum is the Latin name for a Celtic kingdom, or federation of tribes, that included most of modern Austria and part of Slovenia. In the first century C.E. it became a province of the Roman Empire. Its borders were the Danube to the north, Raetia and Vindelicia to the west, Pannonia to the east and southeast, and Italia (Venetia et Histria) to the south. The kingdom was founded ca. 400 BC, and had its capital at the royal residence at Virunum on the Magdalensberg.

Its area corresponded to the greater part of modern Styria and Carinthia, Upper/Lower Austria west of Vienna, Salzburg, a part of Bavaria, and a part of Slovenia. The original population appears to have consisted of Illyrians, who, after the great migration of the Gauls, became subordinate to various Celto-Ligurians tribes, chief amongst them being the Norici (so called after their capital Noreia), who were possibly identical with the Taurisci of Roman sources.

Noricum was incorporated into the Roman Empire in 16 BC. For a long time previously, the Noricans had enjoyed independence under princes of their own and carried on commerce with the Romans. In 48 BC they took the side of Julius Caesar in the civil war against Pompey. In 16 BC, having joined with the Pannonians in invading Histria, they were defeated by Publius Silius, proconsul of Illyricum.Thereafter, Noricum was called a province, although it was not organized as such and remained a kingdom with the title of regnum Noricum, yet under the control of an imperial procurator.Under the reign of Emperor Claudius (41–54) the Noricum Kingdom was ultimately incorporated into the Roman Empire apparently without offering resistance. It was not until the reign of Antoninus Pius that the Second Legion, Pia (later renamed Italica) was stationed in Noricum, and the commander of the legion became the governor of the province.
Under Diocletian (245–313), Noricum was divided into Noricum ripense ("Noricum along the river", the northern part southward from the Danube), and Noricum mediterraneum ("landlocked Noricum", the southern, more mountainous district). The dividing line ran along the central part of the eastern Alps. Each division was under a praeses, and both belonged to the diocese of Illyricum in the Praetorian prefecture of Italy. It was in this time (304 C.E.) that a Christian serving as a military officer in the province suffered martyrdom for the sake of his faith, later canonised as Saint Florian.
The Roman colonies and chief towns were Virunum (near Maria Saal to the north of Klagenfurt), Teurnia (near Spittal an der Drau), Flavia Solva (near Leibnitz), Celeia (Celje) in today's Slovenia, Juvavum (Salzburg), Ovilava (Wels), Lauriacum (Lorch at the mouth of the Enns, the ancient Anisus).
Knowledge of Roman Noricum has been decisively expanded by the work of Richard Knabl, an Austrian epigrapher of the 19th century. To the Novae Roman Festival, organized in Svishtov, Bulgaria, the Nova Roma flag was consecrated.
During the consecration ritual performed by Cn. Cornelius Lentulus I had the honor to represent Nova Roma as it vexillarius.
It is for the first time in the Nova Roma history when this event took place and it become more important because is happen in the year of the Nova Roma tenth anniversary.
Posted by Iulius Crassus at 00:30

These are the results of Nova Roma Ludi Circenses championship of the year 2761 a.U.c
Posted by Iulius Crassus at 03:07 Between 26 - 29 January I participated to the Vasto meeting in Abruzzo, Italy.
Then I visited Rome. Here I'm with my mom.
Report: all the things were at their place ! Romanii rules !
Posted by Iulius Crassus at 21:30

I received a great victory to Nova Roma Ludi Plebeii Circenses 2759 a.U.c
After two years of constant training, finally, I won!
Now, I’m the Champion and the best representative of the Factio Russata.
Posted by Iulius Crassus at 14:41 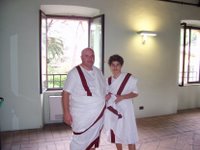 NOVA ROMA CONVENTUS
Nova Roma Conventus represented a great experience.
Each building from Rome and Ostia is an architectural monument.
Stories, legends and facts have at Rome a real representation.
The participants became very good friends after all that days, and, for a week, they were in the middle of the history.
Posted by Iulius Crassus at 14:36

DACIA
Dacia, in ancient geography the land of the Daci or Getae, was a large district of Central Europe, bounded on the north by the Carpathians, on the south by the Danube, on the west by the Tisa (Tisza river, in Hungary), on the east by the Tyras (Dniester or Nistru, now in eastern Moldova). It thus corresponds in the main to modern Romania and Moldova. The capital of Dacia was Sarmisegetusa.
The inhabitants of this district are considered as belonging to the Thracian stock. The Dacians were known as Geton (plural Getae) in Greek writings, and as Dacus (plural Daci) and Getae in Roman documents; also as Dagae and Gaete — see the late Roman map Tabula Peutingeriana. Ancient writers are unanimous in considering the Getae the same as the Daci.
Posted by Iulius Crassus at 22:31